This is a continuation of the Blog-to-Book Project, Life After High School: Secrets to A Successful Life By Those Who Have Had Twenty Years To Think About It or What They Didn’t Teach Us Gen Xers In High School. You might want to check out the previous post, or just start over at the beginning. Today, however, I get into Chapter One, where I take on my dangerous nemesis: The Facebook. Enjoy. 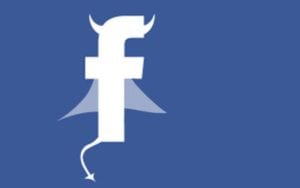 It was a day like any other—debating whether to delete my entire Facebook account, or perhaps just change my profile to something other than a picture of me, just so that people who think they know me can be curious whether or not they have the right Jesse Stoddard, and to become one of those annoying enigma people trolling about online. You know the type: “My Facebook profile picture is a dog because I feel fat in all my clothes!” or, “I need another account to post more hateful political comments in unrelated posts just to annoy people.”

The timing could not have been more serendipitous.

I almost missed the Facebook notifications in the jumbled pile of highlighted interruptions, all vying for my attention. What an annoying and yet addicting website. Who ever could have imagined Facebook would take off like it did and last so long? After all, I never really even logged into Myspace more than once or twice. Who knows? I probably still have a MySpace account that was hacked into by a Nigerian selling real fake Rayban sunglasses on sale, or perhaps posting pictures of “Asian Girls Looking For Serious Date.” If you see my doppelgänger on MySpace, ask him how he’s doing, and when he requests that you send your bank account information so he can transfer the prince’s two-million, tell him you want to marry him and then give him your ex’s work email address.

Years ago, I should have known we were in trouble because a man at least a decade older than me was suggesting I try Facebook since it was “MySpace for adults.” I wasn’t sure what that meant. I was just hoping he was trying to be helpful and not just creepy. I had tried to stay away from these evil crack-addict-type websites, only to get sucked in worse than anyone I knew. It eventually became apparent social media was the only way to stay in communication with people, especially my customers, who spend less and less time talking to humans on the phone, and who all but abandoned email altogether.

It turns out that one of the useful features of Facebook is getting in touch with old classmates from your ancient past, and it was the names and pictures associated with these particular notifications that got me curious. I hadn’t seen these names in years, and they instantly brought back a muffled and hazy slew of memories that I had probably attempted in vain to suppress to move on with my life and finally grow up. One of them was from Tara Starkovich, and the post read: “20-Year High School Reunion,” followed by other long-forgotten names and related conversations about Anacortes High School class of 1996.

“What? twenty years?!! How could this be? Where did the time go? Am I really that old? How could this happen to me? (…And other cliche statements of shock and disbelief).”

There are several possible reactions to notifications of this breed. For some, the reaction is something of a benign apathy:

“Whatever. Who cares? I don’t want to go because I didn’t care then, so why should I care now?”

For others, the reaction is sheer and utter madness:

“Who’s in charge of this thing and how much beer can we drink in one night?”

For the latter folks, the challenge becomes about who has increased their blood alcohol tolerance to a higher level than they had when they were 18. Sadly, most of us can’t even stay up past eleven-thirty anymore, much less go on all night binges driving up and down Commercial Avenue (or any other Mainstreet, USA), and we have little younger genetic copies who wake us in the morning when we want to sleep it off. We have become those old people we used to make fun of and could not relate to! What a crappy deal! I know they said it would happen, but I don’t think any of us believed them. I mean, according to Back To The Future, we were all supposed to be riding hover boards by now, flying time machine cars, and having our wimpy liver organs replaced with super cyborg livers that could process gallons of alcohol at a time.

My reaction was one of curiosity. Perhaps due to a variety of life experiences that were of the tragic variety, I have softened in my desire for constant self-centered busyness, and long for more real connection with people. At least until I tire of them. Then I am an old curmudgeon again. Mostly, it has made me more empathetic (or at least more of a big sappy nostalgia-loving weepy wuss), and more genuinely interested in the fortune of other people, especially those with a shared history.

Now to me, this is not just any shared history. The graduation of high school happens to be a significant rite-of-passage, at least in the life of every uber-American-socialized young man and woman. If anything, popular culture, especially movies, hype up and catalyze the idea that the experience of high school and the associated age range is extremely important, and ultimately sets the trajectory of someone’s entire life. At least socially, the later teenage years feel as if they matter more than anything else in the world (at the time), and I’m sure even the most recluse among us have to admit they were at least curious to know if Scott Dickinson really did marry Tracy Springs. There is some kind of weird sociological cosmic pull that we are powerless against.

No, if you didn’t go to the reunion, you aren’t more evolved, nor are you more enlightened. You aren’t free of the pull, you are just better at realizing it doesn’t matter. Stop being a party-pooper.

I guess I am happy that I didn’t delete my Facebook account. Maybe tomorrow… Right after I finish posting all these pictures of our reunion (insert giddy laugh here), and reading up on where people are now in their lives (and giggling at a few stupid cat pictures in the process). That is if I can get past the innumerable atrocious advertisements all over my screen, trying to sell me things based on what I just clicked on a few minutes ago! Maybe I do need a customized class ring… Oooohhhh… 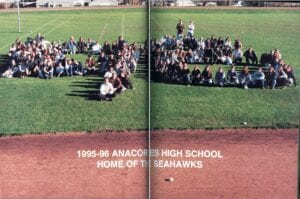 I guess the success of Facebook makes sense considering it was originally supposed to be like one big yearbook. I am on it every day after all. It indirectly made our reunion possible, since Tara couldn’t have found everyone to invite otherwise. Facebook deserves some credit since it helped our reunion to materialize, I was inspired to write this, and now my generation has come full circle. Thanks, Mark Zuckerberg. We love to hate your product. Here’s a ton of money. Enjoy never having to work another day of your life. It’s because of guys like you that millennials refuse to work manual labor jobs and have no work ethic because they all think they’re going to be Internet millionaires…

…And it’s guys like me that spend our money online buying products and running ads… On Facebook … so that guys like you can… Oh, crap. I think I just entered an endless twilight zone paradox time loop of contradiction and hypocrisy. At least our generation can always try to blame the baby boomers, and their love of technology.

Regardless, all the younger kids aren’t even on Facebook. Maybe Tara is right and it won’t exist in a few years. I better give her my phone number and address like she asked! If our next reunion invitation process has to be executed by way of Snapchat, we’re in trouble.

Ahhh, well. When in Rome…

Next up, more extremely interesting interviews with classmates!

Are you from Generation X? I want to hear what you think! Please comment below and participate in the conversation about What They Didn’t Teach Us Gen Xers In High School. What do you wish someone told you when you were eighteen?

Featured in CNN Money Edition, Jesse Stoddard is an artist-entrepreneur, his primary aim is to make his mark in the world by exploring new ideas, enhancing collaboration and cooperation with teams, and working in his unique ability, which is transferring infectious enthusiasm, taking action, and loving people in order to gather and connect with others to pursue a bigger, brighter future.

Please share this post to your social media! Feel free to use the links below… And further down is a place to leave a comment if you are so inclined. 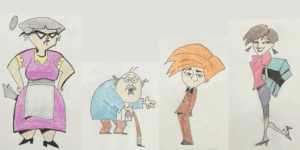 Not long ago, one of my clients asked me, “Jesse, what do you think about tall women with short men?” “Is this 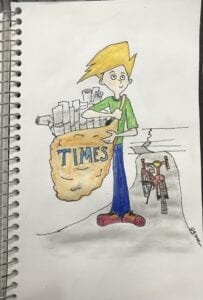 Why Every Kid Needs A Job They Can Quit

My first job was delivering a paper route at around eight years old. As an independent contractor, you were responsible for doing 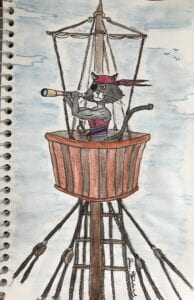 We always had cats growing up. Probably because we had a very unique experience with the first one. My dad was too